Overcoming obstacles on the road to self-awareness

By Cheryl A. Cuddahy

LEOMINSTER » Joseph “Joey” Mullaney may only be 26 years old, but he carries a lifetime of wisdom he wants to share about life’s lessons and adversity.

Mullaney was born and raised in Leominster, where he attended Julie Country Day and St. Anna schools and was active in the local football, basketball, baseball, and lacrosse leagues.

However, when he was just 13, Mullaney discovered that he had a rare neurological disorder called Friedreich’s Ataxia ( FA).

Mullaney revealed that hearing the news of having FA completely blindsided him.

“ There were a lot of various problems that played into my diagnosis,” Mullaney said. “ But one of the biggest challenges was noticing how kids my age were physically developing, yet I was not.”

At age 10, Mullaney considered to be one of the best athletes on his teams, then at age 13, was barely even playing. “ This time span is when I noticed I was getting worse and didn’t know why,” he said.

“ We all know that Leominster is pretty much a sports city where everyone grows up playing something,” Mullaney said. “ So not being as good as others 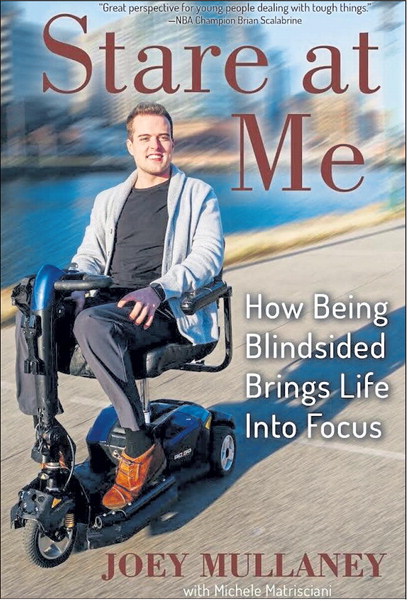 and having to stop playing sports at the age of 14 was extremely challenging for me.”

Surrounded by a supportive family, an abundance of friends, and the finest health care professionals, Mullaney said he still felt alone and afraid.

“ It has been a challenging time for me for sure,” he said, “But throughout this bumpy ride in life, I am thankful that I have now found the road to selfawareness, confidence, and acceptance. There are truly many challenges with FA that I could talk about. However, I don’t want to bore anyone or tell a sob story.”

Since his diagnosis, Mullaney has attended college, developed into a motivational blogger, public speaker, and is now on his way to becoming a published author. After graduating from Lawrence Academy in 2013, he earned a bachelor’s degree from Quinnipiac University in 2017. While there he was a member of the Sigma Phi Epsilon fraternity, an orientation leader, and student body president.

Mullaney began writing a blog in the fall of 2017 titled “ Time and Making It Count.” He went on to earn a master’s degree in communications in 2019 from Emerson College. “ I didn’t know where it would go or who it would impact,” he said. “ But it quickly became an outlet for me to turn my internal struggles/ pain into something positive. The goal was to motivate people in our community, using my stories and beliefs, going through difficult times. By reminding them to keep a positive mindset through the struggle and know there’s always a way out.”

Quickly after beginning the blog, Mullaney was excited to see so many people reach out to him to let him know how his blog helped them in a variety of ways.

“ Those heartfelt words made me enthusiastically understand why I love writing on my blog,” Mullaney added. “ Being able to help others with FA is an extreme honor. But being able to spread awareness to others about what FA is will always hold a huge significance. As I’ve said in many of my blog posts, FA is an extremely rare disease, so telling others who were unaware of this disease is a fantastic gift.”

Following the success of his blog and during time attending graduate school, Mullaney began writing a memoir, which he titled “ Stare at Me.”

“ I thought of this title when I first had ideas of writing a book at age 18,” he said. “ We often see coaches/ teachers/parents tell kids ‘don’t stare at him/ her’ because that someone looks different from an ‘ordinary kid.’ I experienced that, first- hand, on numerous occasions.”

Mullaney said because of that he began to fear many people and became hesitant about going anywhere in public for many years, adding, “ this title is my way of saying that I am now OK with the stares.”

As in many aspects of his life, Mullaney finds the positive in all situations and has also done so with the COVID-19 pandemic.

“As devastating as this past year has been due to the pandemic, the alone time has given me more of an opportunity to sit down and focus on what I’m trying to write and what impact I want the book to have,” added Mullaney.

Writing this book has been a dream of Mullaney’s, and at many times he thought it would not be possible.

“ Writing this book and signing with a publishing house has been an incredible accomplishment for me,” he said. “ This memoir is where I share my insights on the ups and downs of my life, how I navigate the unexpected, and how much fun, despite any adversity, life can be. I show readers how I came to terms with my disease.”

Mullaney feels that writing his first book and continuing his blogs is just the beginning and has helped him understand that he can overcome any challenge that may present itself.

“ FA may never go away, so there’s always a new challenge in front of me,” he said. “ But I use the support of my family, friends, and loved ones to help me overcome many new obstacles. In my book, you will read many stories that crushed me — both physically and mentally — however, those difficult times helped shape me into the man I am today — and oddly, I am grateful.”

Mullaney said he hopes that readers, especially teens and young adults, will see pieces of themselves and their life experiences throughout his book.

“I do not consider ‘Stare at Me’ as only a motivational memoir,” he said. “ I want readers to think of me as a trusted friend that empowers you to stare down whatever faces them and say — ‘ I got this.’” To read and subscribe to Mullaney’s blogs, visit www. joeymullaney. com. ‘ Stare at Me’s expected release date is Sept. 14, 2021. To pre- order the book, you can go online to kicamprojects. com/shop/stareat- me! 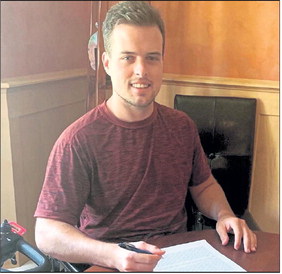 Joey mullaney‘s book, ‘Stare at me,’ will be released in September.

Click here to see this page in the eEdition: